As it's insect week this week I wanted to get at least one post up of my resent outing. I go out most days taking many photos but struggle to find time to name them let alone get them in a blog post!

I have been visiting Ben Rhydding Gravel Pits Local Nature Reserve, which is only 15minuets away if the traffic is good. Right next to the river Wharfe, if you are lucky  you can see the Otters here in the river, I have yet to get lucky!

It has a good range of habitats and is manages by a local group, dogs are allowed on but only on the lead, which is fine by me. There are many wild flowers on site as well, especially Orchids. The last few years the rabbits have been taking there fair share so they have fenced a few of, Orchids not rabbits... 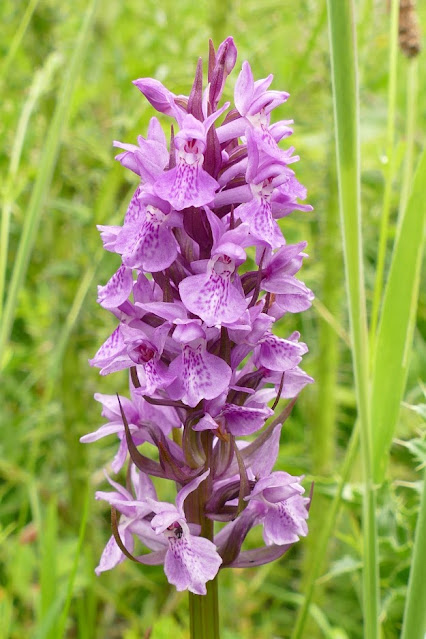 Selection of the wild flowers 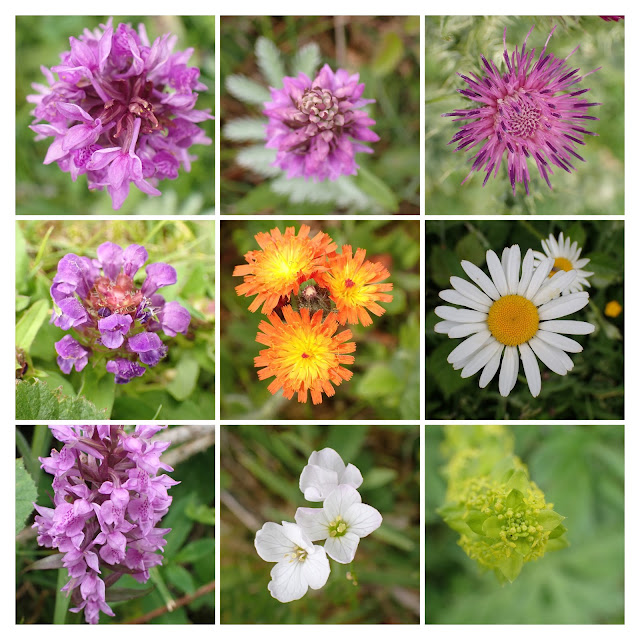 3-7mm - one of our smallest longhorn beetles. It is brownish or dark grey with silky hairs on the wing cases, giving it a sheen. It has long red/black banded antennae, where the 2nd segment is elongate - features which distinguish it from the other two Grammoptera species found in Britain. All three have bulbous femora (top segment of the leg). (Nature Spot) 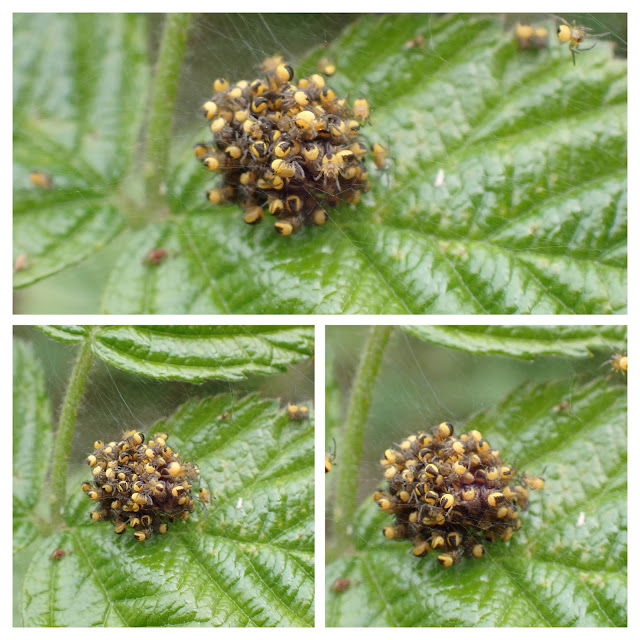 Roast-beef plant
Iris foetidissima, the stinking iris, gladdon, Gladwin iris, roast-beef plant, or stinking gladwin, is a species of flowering plant in the family Iridaceae, found in open woodland, hedgebanks and on sea-cliffs.
Iris foetidissima is the perfect iris for a shady spot, particularly beneath trees, where other plants struggle. 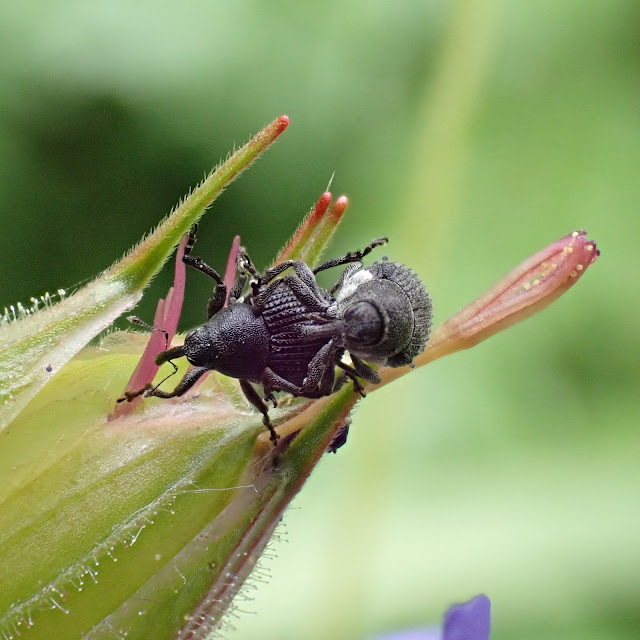 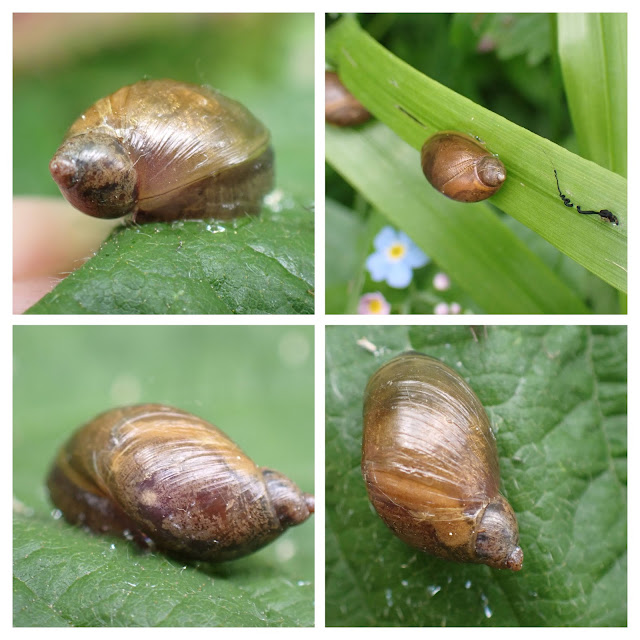 Wandering Pond Snail
(Ampullaceana balthica)
It will colonise weedy garden ponds. It is the pond snail most likely to be seen out of the water, climbing on to emergent vegetation or on to mud on the bank. It does not travel far from the water, always staying in very damp situations.
(LINK) 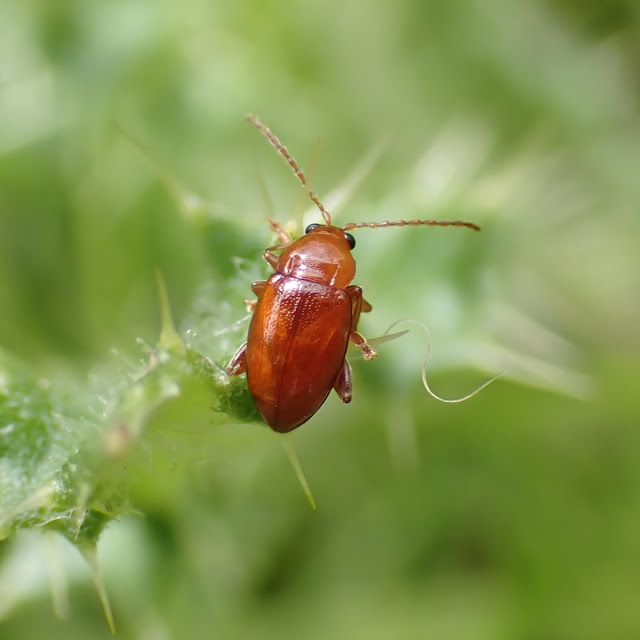 Flea beetle  Chrysomelidae sp
Chrysomelidae. More specifically, Asiorestia or Neocrepidodera as it's now known. It's one of the many "Flea" beetles in Chrysomelidae
A large and widespread family with 250 small to medium-sized British members 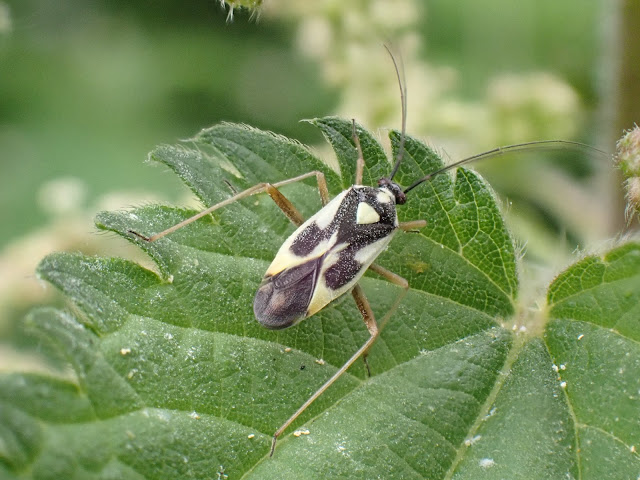 Miridae Bug (Grypocoris stysi)
(Could be Stenotus binotatus)
A conspicuous bug found widely throughout the UK, usually on nettles in woodland, and sometimes umbellifers and white bryony. The adults and larvae feed on both flower heads as well as small invertebrates such as aphids.
The chequered pattern of light yellow-white areas and striking orange-yellow cuneus make confusion with other species unlikely.
Eggs hatch in May and nymphs become adult in June and July, rarely surviving much beyond August.
(LINK) 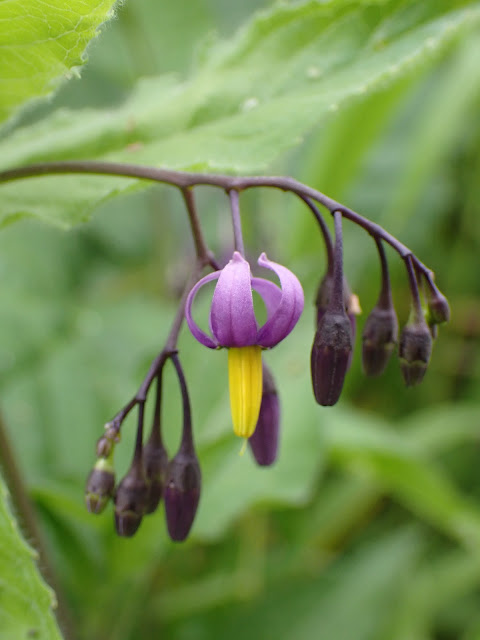 Deadly v Woody Nightshade
Deadly nightshade (Atropa belladonna)
Wood nightshade (Solanum dulcamara)
Atropa belladonna, commonly known as belladonna or deadly nightshade, is a poisonous perennial herbaceous plant in the nightshade family Solanaceae, which also includes tomatoes, potatoes, and eggplant (aubergine). ... The antidote for belladonna poisoning is physostigmine or pilocarpine, the same as for atropine.
Solanum dulcamara is a species of vine in the potato genus Solanum, family Solanaceae. Common names include bittersweet, bittersweet nightshade, bitter nightshade, blue bindweed, Amara Dulcis, climbing nightshade,fellenwort, felonwood, poisonberry, poisonflower, scarlet berry, snakeberry, trailing bittersweet, trailing nightshade, violet bloom, and woody nightshade.
The effect
Deadly Nightshade: Symptoms may be slow to appear but last for several days. They include dryness in the mouth, thirst, difficulty in swallowing and speaking, blurred vision from the dilated pupils, vomiting, excessive stimulation of the heart, drowsiness, slurred speech, hallucinations, confusion, disorientation, delirium, and agitation. Coma and convulsions often precede death! Yikes! There have been differing opinions on what is required to be digested in order to cause poisoning, some saying half a berry, others saying 20+. To make it simple just never eat any! Or the root which is even more toxic!
Woody Nightshade: It contains solanine, an alkaloid glycoside. It increases bodily secretions and leads to vomiting and convulsions. The strength of its actions is said to be very dependent on the soil in which it grows with light, dry soils increasing its effects. Though the berries are very attractive the bitter taste is a disincentive for the majority of people, especially children. There have been no recorded deaths from eating the berries from this plant in recent years but it will likely give you a very sore tummy and need medical attention if consumed.
(LINK) 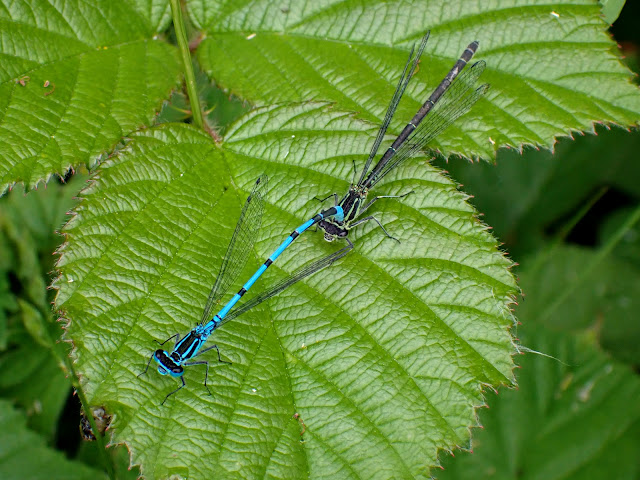 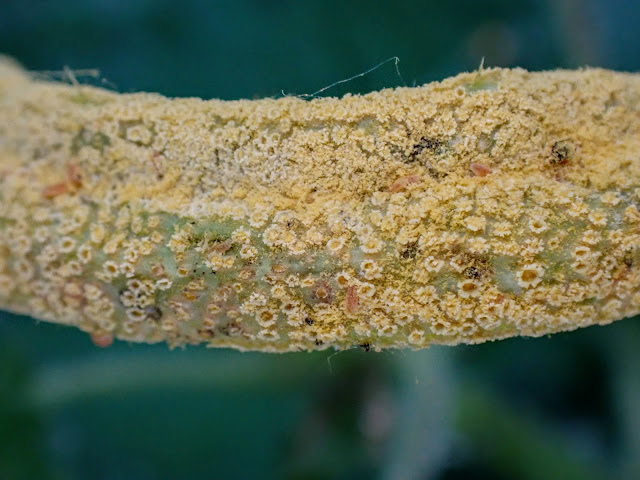 Rust Fungus - Puccinia urticata
Puccinia urticata is a rust fungus which develops on the stems and leaves of Common (Stinging) Nettle or Small (Annual) Nettle. It often starts as small orange blisters or swellings. Close examination may reveal the pinhead-like fruiting bodies of the fungus.
https://www.naturespot.org.uk/species/rust-fungus
An estimated 168 rust genera and approximately 7,000 species, more than half of which belong to the genus Puccinia, are currently accepted. Rust fungi are highly specialized plant pathogens with several unique features. Taken as a group, rust fungi are diverse and affect many kinds of plants. However, each species has a very narrow range of hosts and cannot be transmitted to non-host plants. In addition, most rust fungi cannot be grown easily in pure culture. 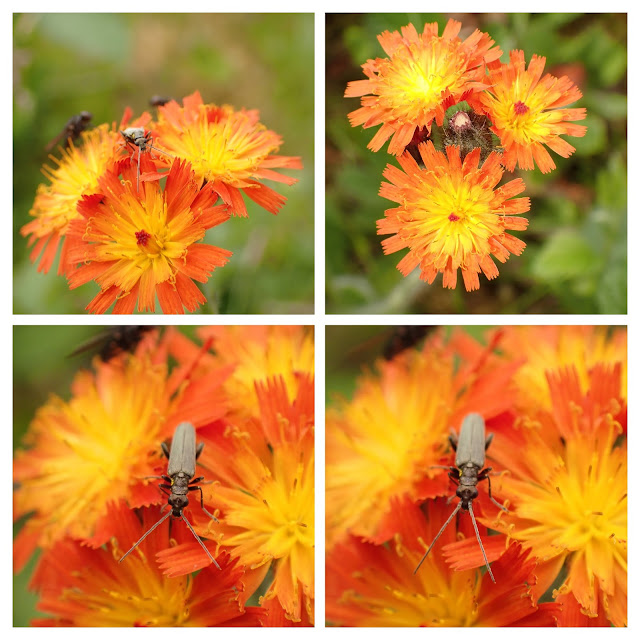 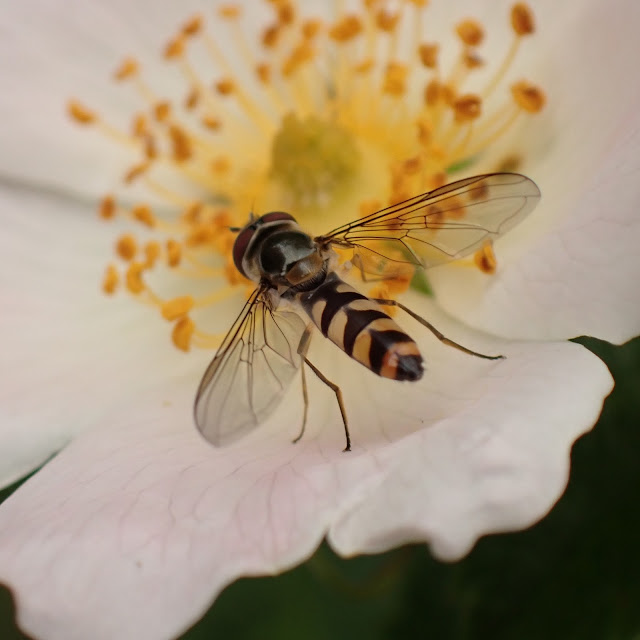 Hoverfly (Meliscaeva auricollis.)
female
Though small and dark coloured, the slanting rear border of the yellow crescent marks on tergite 2, particularly in males, help to identify the species. The spring generation tend to be darker bodied than those born later in the year.
(LINK)
I hope you manage to spot a few of these insects through the week, and I'm hoping I have got their names right.
on June 23, 2021 15 comments:
Email ThisBlogThis!Share to TwitterShare to FacebookShare to Pinterest
Labels: Insect Week, June 2021

The sun has got his hat on.. 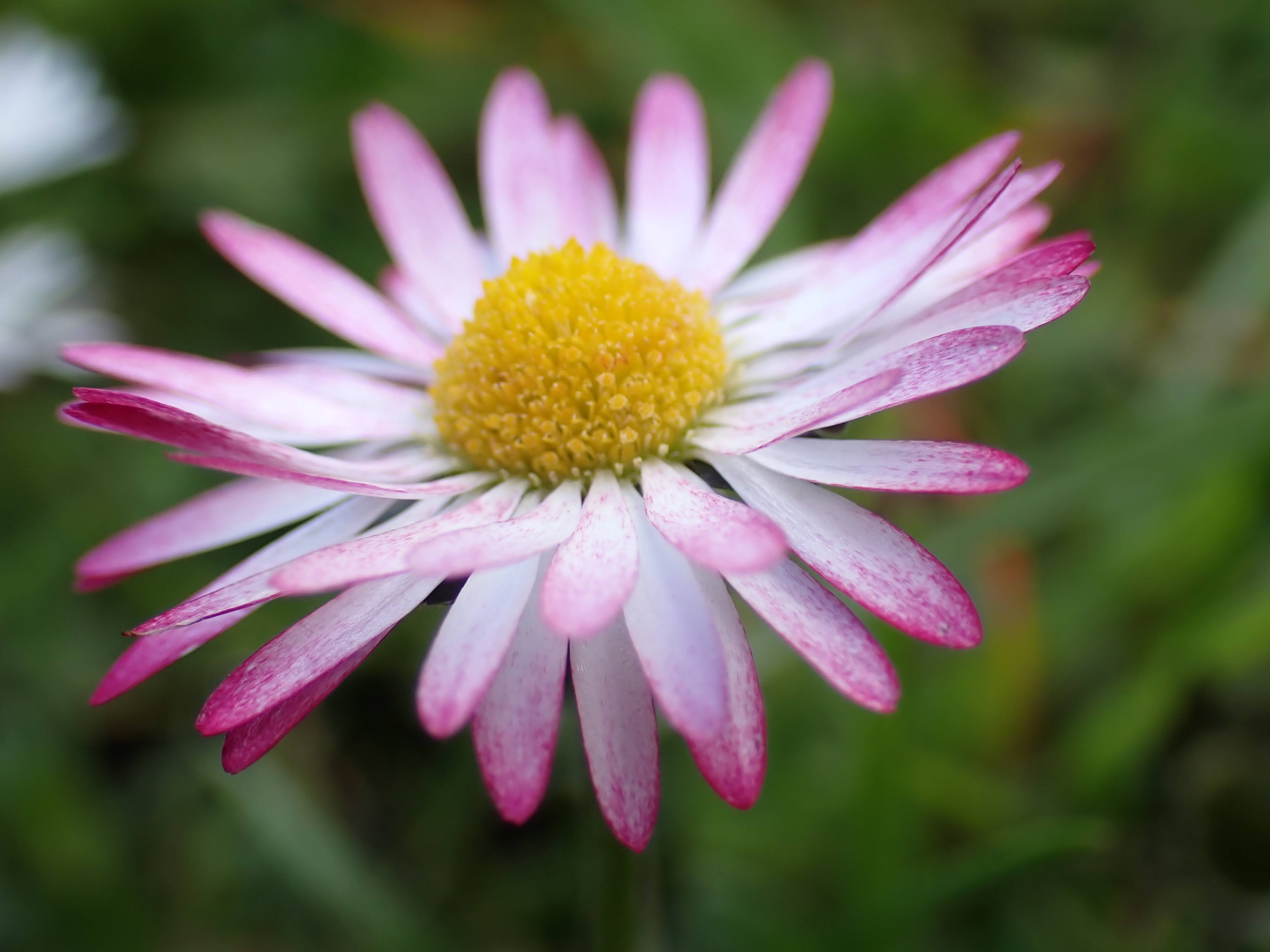 Tuesday turned out to be a very sunny day, as I am writing this it is now raining , cold and windy !
Taking a trip to the park there was a definite buzz in the air, Butterflies were out, Hoverflies as well as many other insects. The wildflowers had sprung up especially Buttercups. The grass was green and everything just looked wonderful.
Coming up is just a few of photos I took on the day, I went out twice the second time taking my insect net to sweep the grass.

Xylota is a Holarctic genus of hoverflies similar in structure to the related genera Chalcosyrphus and Brachypalpoides. As the larvae are saprophytic in rotting wood the adult flies are generally found associated with woodland and woodland edges and can often be seen running over the upper sides of leaves.(LINK)
It was nice to spot a 14 Spot ladybird (Propylea quattuordecimpunctata), what a name! but ran of before I could get a better photo. 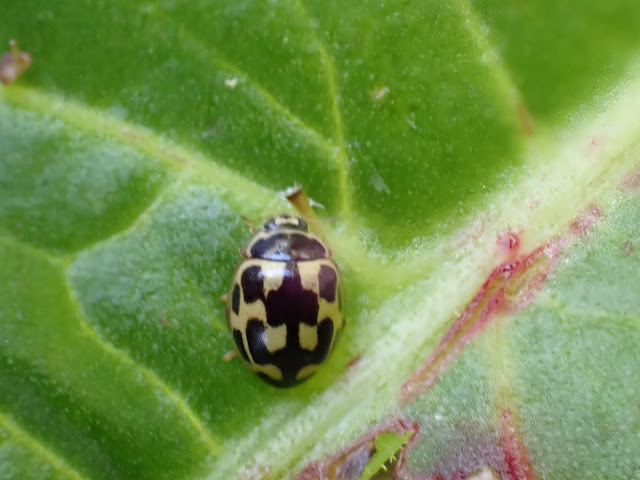 In flight April-October. Hovers in and around damp vegetation but not easily seen due to size and slim build. Larvae feed on aphids. Another new Hovefly for my list. 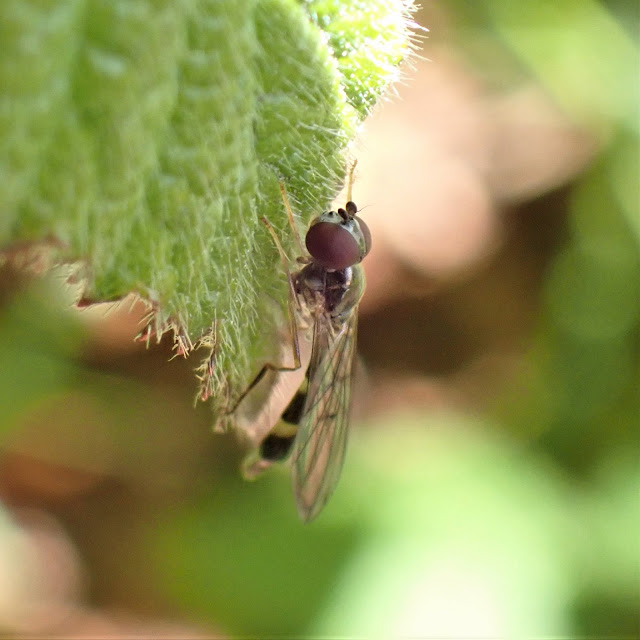 I have been struggling to get a good photo of "Greenfly" when researching the aphid I was surprised to find there are many species not just green and black! in fact there are over 300 British species !!! most  will just feed on their own host plant which helps with ID .
Another insect that has had me fascinated is the weevil , just about every plant has it's own weevil and there are 60,000 species of weevils have been described worldwide, and yet many species are still unknown to science. Some are very tiny.

One of the best finds of the day was this Dirt-colored seed bug , a new species for me. I found it on a pine tree.
The animal is often found in rather damp places, usually among leaflitter or mosses. They feed however by sucking on the seeds of trees or shrubs, such as birches and alder. It is single-brooded but breeding continues in all suitable seasons, so eggs, larvae and adults can be seen all year round. Adults are even active on mild winter days.
From the 19th May

Dance fly, (family Empididae), any member of a family of insects in the fly order, Diptera, that are named for their erratic movements while in flight. Dance flies are small with a disproportionately large thorax and a long tapering abdomen. In males, the abdomen usually bears conspicuous genitalia at the posterior end.

Whishing you all your own sunny day.
on May 20, 2021 10 comments:
Email ThisBlogThis!Share to TwitterShare to FacebookShare to Pinterest
Labels: 2021, may, The sun has got his hat on..
Older Posts Home
Subscribe to: Posts (Atom)